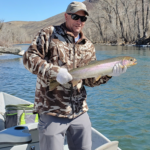 Fishing on the Salmon River around Challis has been steady. Fish are being caught up river from Challis to the Yankee Fork, but still a little slower than down river. Most anglers are still fishing below Challis towards Salmon. There’s a good group of steelhead coming up river according to the pit tag monitors, so fishing should be picking up. The Pahsimeroi Hatchery has trapped 198 hatchery steelhead as of Monday, March 22nd. Additionally, and the Sawtooth Hatchery installed their weir last week with a few fish in the traps. The Sawtooth Hatchery will report the number of fish in the hatchery next week.as they begin spawning the fish. Water temperatures are in the low 40’s still and the Salmon River is lower than normal. running at 2.15 ft. at the Clayton gauge. Darker flies seem to be working better than egg style patterns currently, but there has been some good results on chartreuse also. You might also try nymphing some stone fly patterns since the water is still a little cool.  Spin and drift anglers should try copper, brass, green or blue spoons.

← Back to Fishing Report Listings