Fishing on the Upper Salmon has stayed Consistent over the last few weeks.  Steelhead Anglers are focusing most of their efforts in the sections between Challis and Stanley with catch rates decent.Try using Egg Sucking Leeches, Intruders or Muddler Minnows on the swing, Stonefly Nymphs, Single Egg and Spawn patterns are working for the nymphing crowd. 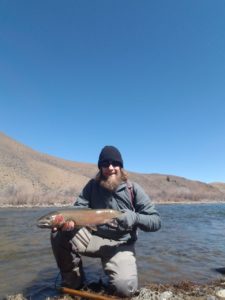 If Steelhead are not you thing, the trout have been active with some Cutthroat and  Cutt-bows, and Bullies in the mid 20’s being caught upstream, and there are some some nice Rainbows showing up below town. Swinging Sculpins, Dace and Smolt patterns will be effective for these guys, as well as the standard fare of Copper Johns, Prince Nymphs and Pheasant Tails in smaller sizes. 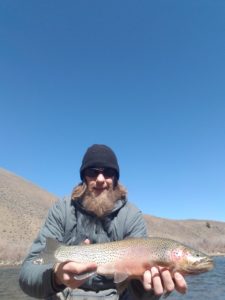 Water conditions continue to fluctuate with water temps below town ranging from mid 40’s here in Challis to low 50’s near Salmon.  Up river has been fairly consistent 41-44 Degrees. Water Quality above the East Fork is next to Gin clear, Water Below the East Fork is still suffering from Flash Floods last July.  With an average of 2-4 foot visibility with a “Glacial Green” look to it.  The area has gotten Snow over the last few days, so far it hasn’t  effected the River, with Daytime Highs in the low 40’s and nights dipping into the low teens, we should be able to get another week in the upper salmon before the runoff hits in force.

The Challis Bridge launch is still closed due to damage sustained over winter, the launch at Watts Bridge is also closed for repairs April 11-21st.  All other ramps and access points are still viable.

← Back to Fishing Report Listings